Start a Wiki
watch 01:24
The Loop (TV)
Do you like this video?
Alan Shot a Little Girl 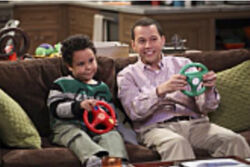 Ms. McMartin approves Alan and Walden to foster Louis for six months with a view to adopting him. She warns that Louis, being a foster child that has moved around a lot, may have some behavioral problems. Sure enough, Louis tries to manipulate Alan to get what he wants, which causes Alan and Walden to clash when Alan breaks Walden's rules in order to be the "cool" dad. After Louis continues to try and get what he wants by refusing to put a box of cereal back at the grocery store, Walden has Alan use some of his previous expertise with Jake to fix the situation. Both Alan and Walden keep the cereal for themselves in the end.

Louis, discussing Alan's behavior at laser tag and thus exposing Alan's lie to Walden about where they were.

Retrieved from "https://twohalfmen.fandom.com/wiki/Alan_Shot_a_Little_Girl?oldid=25693"
Community content is available under CC-BY-SA unless otherwise noted.