Start a Wiki
watch 01:24
The Loop (TV)
Do you like this video?
Aunt Myra Doesn't Pee a Lot 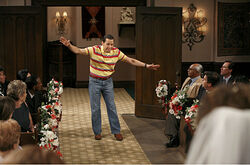 Judith's and Herb's wedding is taking place soon, and Alan is looking forward to it; Charlie and Herb's sister, Myra, continue their relationship. Also, Jake repeatedly gets his tuxedo dirty.

Alan's dream of freedom is about to come true now his ex Judith is getting remarried to Herb. He worries that Charlie, who is having sex with Herb's sister, Myra, will somehow ruin it for him again. Getting Jake prepared for the ceremony is just a dirty routine problem. Charlie stands in for the sick relative who was to walk bridesmaid Myra to the altar, just to infuriate Judith. He's after some fun but gets a bitter aftertaste.

Jake, as he complains about Alan waking up four times to go to the toilet.

Retrieved from "https://twohalfmen.fandom.com/wiki/Aunt_Myra_Doesn%27t_Pee_a_Lot?oldid=21234"
Community content is available under CC-BY-SA unless otherwise noted.