Start a Wiki
watch 01:24
The Loop (TV)
Do you like this video?
Big Girls Don't Throw Food 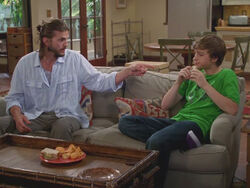 Big Girls Don't Throw Food is the 3rd episode of Season 9. It originally aired on October 3, 2011.

Continuing from "People Who Love Peepholes", Alan has moved back in to Walden's beach house. However, two problems arise, Berta now lives with Walden in Alan's old room, and Alan has to convince Walden to let Jake stay. Walden has no problem with Jake, and Alan and Jake must live in the same room.

Later that day, Walden and Jake have a conversation on the couch. Walden tells Jake how he quit school and made his first million before he was 19. This makes Jake try to convince Alan to let him drop out. Alan strongly disagrees. That night, Alan helps Walden prepare for his date with Bridget, his estranged wife. They talk about Alan's experience, and Walden leaves.

On their date at a small family restaurant (as per Jake's recommendation), Walden and Bridget talk, which she tells him that they are still getting a divorce. At the same time, Walden ensues a food fight with a small girl sitting near him. At the house, Judith comes over to yell at Jake for attempting to drop out. Walden then shows up at the house, and Judith and him starting making out after Judith learns of his divorce. Jake films the entire ordeal.

Later in the night, Alan and Jake (sleeping in the same room) talk about him dropping out. Alan tells Jake that if Judith agrees, Jake can drop out and Alan will buy him a car. Jake smiles, knowing he has the leverage against his mom. At the same time, after having wild sex, Herb asks Judith what got into her as she tries to convince Herb to grow a beard like Walden's.

Walden says this when the little girl begins to throw food at him.

Retrieved from "https://twohalfmen.fandom.com/wiki/Big_Girls_Don%27t_Throw_Food?oldid=25598"
Community content is available under CC-BY-SA unless otherwise noted.