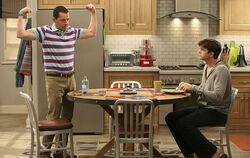 Walden discovers how challenging it is to be intimate with women with his foster son, Louis, in the house. Also, Herb asks Alan if he can go on a date with Lyndsey.

Laurel brings her daughter to the beach house for a play date with Louis. After the kids fall asleep, she and Walden attempt to have sex, but Louis interrupts. They later decide to get a hotel room while babysitters watch the kids. Just as they are getting intimate, Laurel hints that Louis has trouble sharing while Walden retorts that Laurel's daughter is a biter. The two argue, then have angry sex. Meanwhile, Herb has just completed Alan's physical exam, and says Alan really needs to exercise more. He suggests Alan come to his yoga class, which has the added benefit of being surrounded by hot women. One of the "hot women" they see there turns out to be Lyndsey. After Alan and Lyndsey argue a bit, Herb asks if he can pursue Lyndsey, given that the she and Alan are no longer together. Despite agreeing it would be a bad idea and a violation of the "bro code", Alan finds that Herb did indeed sleep with Lyndsey when he goes to apologize to her later.

Alan, while staring at a woman on an exercise ball, before realizing it's Lyndsey.

This episode marks the final appearance of Herb Melnick.

Retrieved from "https://twohalfmen.fandom.com/wiki/Bouncy,_Bouncy,_Bouncy,_Lyndsey?oldid=25072"
Community content is available under CC-BY-SA unless otherwise noted.