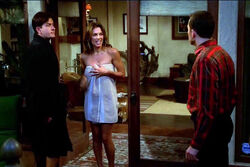 Charity was Alan's girlfriend and was going to be his prom date in junior high school, but she left him the night before junior prom for unspecified reasons.

Twenty years later, it is revealed that she dumped Alan for Charlie because he was better-looking. Alan was furious with Charlie for doing this and retaliated by stealing Charlie's latest fling, Gabrielle, adding to the feud between Charlie and Alan at the time. After it was revealed that Alan stealing Gabrielle was part of Charlie's plan to get rid of her, Charlie ended the feud by sleeping with Charity again.

Retrieved from "https://twohalfmen.fandom.com/wiki/Charity?oldid=20814"
Community content is available under CC-BY-SA unless otherwise noted.