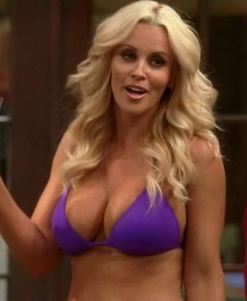 Sylvia made her first appearance in Shoes, Hats, Pickle Jar Lids as Teddy’s daughter Courtney. Charlie immediately falls for her stunning beauty, but Teddy immediately asks Charlie to stay away from her. Though Charlie tries to remain faithful to Teddy, he ends up having sex with her, as she tricks him into doing so, so that she can blackmail him into buying a Ferrari. At all stages, Alan tries to stop Charlie from getting close to her, warning that she's a sociopath, but he doesn’t listen.

Later on, during Evelyn and Teddy’s wedding planning, Courtney starts playing hard to get for Charlie, cutting him off at all occasions. When Teddy announces that he doesn’t need to sign a pre-nuptial agreement with Evelyn, Courtney overreacts. Due to this, Charlie starts stalking her (with the help of Rose), and Courtney eventually tells him that she has lost her job, about to lose her condo, and her father would not help her. Claiming that she needed $ 50,000, Charlie eventually lends her the money, and the pair started a relationship. Moments before she became his step-sister, Charlie proposed marriage to her.

About an hour after the marriage ceremony of Evelyn and Teddy, the latter is found dead on Charlie's bed. This leads to a CSI investigation, during which the whole Harper family and Courtney are questioned. The investigators find out that both Teddy and Courtney were con artists and partners, whose actual names were Nathan Krunk and Sylvia Fishman respectively. Nathan died due to a heart attack while attempting to have sex with Sylvia. While being escorted by the police, Charlie planned to tell Sylvia off for conning him, but was only able to say “I’ll wait for you”.

Sylvia returns from prison during Thanksgiving dinner. Charlie immediately dumps his family when she claims that she hasn’t had sex for three years, and both of them go to Las Vegas. Alan sees Sylvia for what she really was; she had been using Charlie for money and material things, while dating her so-called black brother James. During their time together, Charlie also got severely injured in the eye, arm and on a toe. After a heated argument between them when he refuses to lend her money for James, she leaves him with all her stuff which he bought her. But Charlie suddenly runs to get her back, and crashes in a glass door, thereby ruining his face too. When Sylvia comes to check on him in the hospital, he claims that he loves her, and the two get back together.

During their time together, she shops on Charlie’s money; even getting Jake his favorite clothes too.

In Nice to Meet You, Walden Schmidt, Sylvia appeared at Charlie's funeral. Though her relation with Charlie ended on a mutual basis, she insults him and wanted the casket to be opened to spit on Charlie's remains. Sylvia was only silenced by Evelyn's words over the death of her son.

In "Nine Magic Fingers", seeing a vulnerable and a heart-broken Walden, Sylvia puts the moves on him and tries to take advantage of his wealth. Walden introduced her to Alan and Lindsey who were shocked to see her. The next day, she and Walden spent time together as Walden thanks Alan for introducing them and she slyly agrees with his statement that Sylvia would have found him anyway. At this stage, Alan helped Walden in showing Sylvia's true motives by calling in Walden's wife Bridget who insults Sylvia. Bridget gives her a check to leave Walden but she tries to resist until Bridget she did a background check and she promptly dumps Walden. It was mentioned that Sylvia is wanted in three states, suggesting that she continued conning people after her release.

Retrieved from "https://twohalfmen.fandom.com/wiki/Courtney_Leopold?oldid=25721"
Community content is available under CC-BY-SA unless otherwise noted.