Start a Wiki
watch 01:11
The Loop (TV)
Do you like this video?
Cows, Prepare to be Tipped 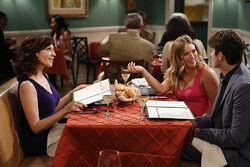 Cows, Prepare to be Tipped is the Season 10 finale. It aired on May 9, 2013. This episodes marks the final appearance of Angus T. Jones.

Jake comes home on leave and announces that he is going to be stationed in Japan for at least a year, which saddens Alan. While Jake and Alan go on a father-son bonding trip to the Grand Canyon, Jake tells him that he realizes his father was not at fault for the divorce between him and Judith, as it was entirely her fault. While they rest at a hotel for a night, they kick back and smoke the last of Charlie's beloved Cuban cigars which Alan reveals he originally planned on smoking them with Jake whenever he graduated college, which Alan and Jake laugh heartily over. Alan also gives Jake some money to get by, which surprises Jake. Jake tells Alan how much he has meant to him over the years, citing how they got to live in a luxurious beach house, and despite his uncle's passing, they continued to do so. Touched, Alan reluctantly give Jake some more money. On the edge of the Grand Canyon, they enjoy the sunset and Jake has thunderous gas with quite an echo.

Meanwhile, Walden dates a ditzy 22-year-old named Stacey, but becomes more interested in her attractive and accomplished grandmother, Linda. Linda first turns him down, but they later fall into bed, and Stacey approves of her grandmother making out with the "old guy".

Alan in the car, excited about his father-son trip with Jake.

Retrieved from "https://twohalfmen.fandom.com/wiki/Cows,_Prepare_to_be_Tipped?oldid=23650"
Community content is available under CC-BY-SA unless otherwise noted.