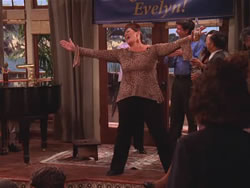 Daisy is Berta's younger sister. She is played by Camryn Manheim.

When Charlie and Alan had to organize a party for Evelyn, Berta suggested they call her sister, Daisy, who is party decorator. But the problem was that she and Berta spent all their time fighting and did not focus on the party. Charlie tried everything for them to make peace and, finally, got her act right in front of everyone, taking the limelight from Evelyn who was disregarded in the party.

Even though their family was poor, Daisy was the favorite child. Berta had to let go many of her useful things for Daisy to have some silly, useless things.

Retrieved from "https://twohalfmen.fandom.com/wiki/Daisy_Ray?oldid=25621"
Community content is available under CC-BY-SA unless otherwise noted.