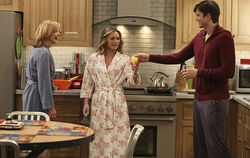 After they sign their divorce papers, Walden offers Alan the gift of his choice, but when Alan chooses something selfish and impractical, it puts his relationship with Lyndsey on the line.

As both couples are getting along together, Walden decides he wants to get divorced from Alan and move on. Walden gives Alan a wish because he was such a good friend in helping him adopt Louis. Alan gets a Ferrari, which makes Lindsey mad, as both she and Walden think Alan should have wished for something that included Lyndsey. Alan decides to propose to Lindsey — especially after Walden offers to buy the engagement ring. Walden in turn offers nothing but support, but then panics that he might truly end up alone if he lets Alan move out. Alan proposes and Lyndsey at first balks, but she happily says yes upon seeing the huge diamond in the ring.

Walden, referring to how he gave Alan too much power by selecting anything he wanted.

Retrieved from "https://twohalfmen.fandom.com/wiki/Don%27t_Give_a_Monkey_a_Gun?oldid=24779"
Community content is available under CC-BY-SA unless otherwise noted.