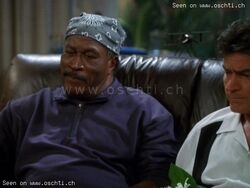 Edward Boyton, nicknamed as "Ed", is the boyfriend of Tom and common-law stepfather of Chelsea Melini. He is portrayed by John Amos in Two and a Half Men.

Two and a Half Men

He is mentioned in the episode by Tom, Charlie, Alan and Chelsea. After a discussion about how the two men in the bar were happy together, Chelsea's father talks about a man he met while in the Navy. He was living in Valencia. At home, Chelsea's parents begin to fight and, eventually, split up. Charlie reveals that Edward reciprocated Tom's feelings and they got together.

Ed makes his first appearance, where he and Tom are seen arguing over little things in their relationship (chronological time of their previous marriages, cleaning pet Skipper's leavings, ect), nonetheless, Ed and Tom express sympathy for Charlie's depression and then leave together when Chelsea asks them for some privacy so she could talk with Charlie.

I Found Your Moustache

Charlie tries to win Chelsea back and turns to Tom and Ed for some advice, both of whom were arguing about each other's choice of furniture for the apartment. Both Tom and Ed offer advice to appear in control, not needy.

This Is Not Gonna End Well

Tom and Ed are seen gathered with the party guests wishing Chelsea a happy birthday.

Add a photo to this gallery
Retrieved from "https://twohalfmen.fandom.com/wiki/Edward_Boyton?oldid=25780"
Community content is available under CC-BY-SA unless otherwise noted.