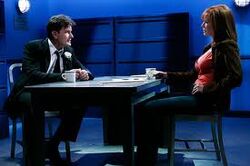 As Evelyn and Teddy's wedding ends, Charlie and Courtney head upstairs to his room but they discover that on Charlie's bed is the dead body of Teddy. However Teddy's pants are around his knee's and there is lipstick on his penis (plus a huge amount of semen around the walls). Charlie tells Alan what has happened, and they discover that their mom doesn't know. When they eventually get their mom to come upstairs to Charlie's bed she tells them she did not have sex with Teddy adding "I already married the man". Evelyn calls the police after calling the travel company and exchanging two tickets to Paris for one to Fiji. When the police arrive they examine the crime scene and take Charlie, Alan, Jake, Evelyn, Courtney and Berta to the police station for questions about Teddy's death. During questioning Charlie hits on the investigator, Alan is too nervous about it and doesn't make any sense, Evelyn mostly complains about the coffee but does let slip the fate of her previous husbands. Meanwhile Berta too becomes attracted to her investigator, Jake is only interested in food but Courtney suspiciously asks for a lawyer. During the investigation Evelyn becomes the prime suspect because of money, despite her alibi proving her innocent. Eventually the crime team discovers that Teddy and Courtney are not who they appear. Their real names are Nathan Krunk (Teddy) and Sylvia Fishman (Courtney) and they are scam artists who travel the country stealing money from people with "more money than brains". It is determined Teddy died of a heart attack while having sex with Courtney who was not his daughter as previously thought. All the Harpers and Berta are released from custody, and Evelyn continues her trip to Fiji.

Fish in a Drawer

Retrieved from "https://twohalfmen.fandom.com/wiki/Fish_in_a_Drawer?oldid=25465"
Community content is available under CC-BY-SA unless otherwise noted.