Start a Wiki
watch 01:24
The Loop (TV)
Do you like this video?
For The Sake of The Child 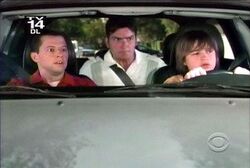 Alan takes Jake to teach him how to drive, with Charlie tagging along. After a horrific drive, the three go to a movie. Jake becomes embarrassed of the two after they start arguing about proper movie food (Alan brings deviled eggs and 1-year-old Holloween candy to the theatre). After the movie, the three go to an ice cream parlor with Alan and Charlie still arguing. This time, the argument is about the food Alan is getting. The two don't realize that they are embarrassing Jake in front of some girls he knows.

After dropping Jake off at Judith's, Charlie and Alan go home and play a word game, where they say an insult in the right alphabetical order (e.g. mistake, nancyboy, oddly shaped, etc.). They then get a call from Judith finding out that Jake doesn't want to go to their house next weekend. Alan tries to fix his and Charlie's brotherly relationship with a book he tried using when he and Judith were having marital problems. This results in Charlie giving a big list of what Alan should change about himself (with him mentioning "and your address" every three suggestions).

Alan and Charlie go to Judith's to apologize to Jake. But Charlie feels no need to apologize and the two get in another fight. Judith gets fed up and forces Jake to go with them. Jake gets in the car before the two and drives off without them, prompting Judith to call a cab for the two ride home in. Later that night, Alan and Charlie end up accomplishing the relationship book albeit drunk.

Alan, wanting himself and Charlie to put aside their differences so that Jake will want to stay with them on weekends again.

Retrieved from "https://twohalfmen.fandom.com/wiki/For_The_Sake_of_The_Child?oldid=24738"
Community content is available under CC-BY-SA unless otherwise noted.