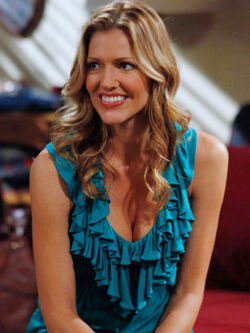 Gail is the former best friend of Chelsea. When she stayed over at the Malibu Beach House she was attracting the attention of everyone in the house; namely Charlie, Alan, Jake and even Berta.

Charlie first met Gail when he and Chelsea meet her for a dinner. She is impressed by their relationship. She starts crying, revealing that she just broke up with her boyfriend, Brian and he even took their dog, Rufus. Charlie keeps thinking as to how could anyone get bored of her. Chelsea invites her to their house to which Charlie says "Absolutely" (even though he never heard the question). Back at the house, Charlie hopes that he could have a threeway with both the women (it only happens in his dreams, Alan too dreams of sleeping with her but not Chelsea). Chelsea has to go to work early and leaves Charlie with Gail in the house. Charlie tries to control himself, so that he may not do anything regrettable, which would mess with his relationship with Chelsea. Berta is the one who suggests that Alan has the "capacity" to drive any woman out of the house. Charlie encourages Alan to hit on her. It works and she packs up her things and leaves.

Ixnay on the Oggie Day

Charlie runs into Gail again at a pizza shoppe where she feels sympathetic, saying she understands as she too is lonely. She gives him her number and the two later have sex even after Chelsea tells Charlie that she wants to get back with him. He later tells her about Chelsea's call and the two agree to keep their sexual encounters a secret while still continuing them. Charlie later meets Chelsea for coffee and admits that he slept with Gail, causing Chelsea to angrily storm off. She later comes round his house to apologize admitting she over-reacted but again storms off after realizing that he is still having sex with Gail.

Nice to Meet You, Walden Schmidt

She is present at Charlie's funeral and reveals that Charlie gave her an STD.

Retrieved from "https://twohalfmen.fandom.com/wiki/Gail?oldid=25434"
Community content is available under CC-BY-SA unless otherwise noted.