Start a Wiki
watch 01:24
The Loop (TV)
Do you like this video?
Give Santa a Tail-Hole 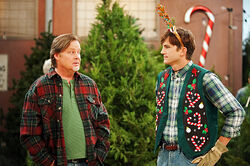 Still pretending to be the poverty-stricken "Sam Wilson", Walden spends Christmas with Kate, who urges him to get a job. He then gets a call from his internet business partner Billy, who tells him that they have been offered $800 million for their "electronic suitcase". Billy wants to sell, but Walden wants to hold out for a higher price. "Sam" gets a job selling Christmas trees, which he takes to immediately and enjoys. Billy stops by the Christmas tree lot multiple times with new offers, urging Walden to sell, but Walden repeatedly shoos him away, saying he will not sell for less than $1.4 billion. Just as "Sam" closes a $40 deal with a Christmas tree customer, Walden and Billy close a deal to sell their electronic suitcase for $1.2 billion. After Kate's sewing machine breaks, Walden uses his Christmas tree commissions to buy her a new one for Christmas. Walden feels much happier with Kate in his new blue collar world. Meanwhile, Alan plans to spend Christmas Eve with Evelyn, Jake and Lyndsey, but none of them are able to come. Jake plans to spend Christmas with his girlfriend and her children, Evelyn is having plastic surgery, and Lyndsey has to go to Cleveland to help her grandmother, who broke her hip. Alan begins to feel alone and miserable, until a less-than-willing Berta comes to seemingly comfort him.

Kate, realizing a mistake she made on the Santa outfit for her boss' labradoodle.

This is 15th episode that the late Charlie Harper has been mentioned on Two and a Half Men.

Retrieved from "https://twohalfmen.fandom.com/wiki/Give_Santa_a_Tail-Hole?oldid=25113"
Community content is available under CC-BY-SA unless otherwise noted.