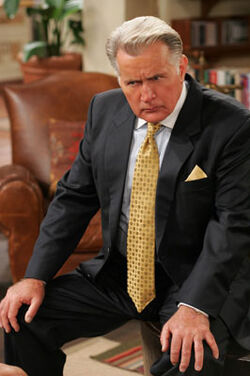 Harvey's first and only appearance is in "Sleep Tight Puddin' Pop". Harvey is the son of two first cousins, which is quite possibly the reason for his emotional instability. He is the owner of a bank, and for this reason he is very wealthy. Rose, who was afraid that her father would disapprove of her stalking of Charlie, told Harvey that she and Charlie were dating for two years. Harvey confronted Charlie about 'stringing Rose along' when he learned the truth. During this encounter he met Evelyn Harper, Charlie's mother and they begin dating, though Evelyn dislikes this very quickly as Harvey moves into her house un-welcomed. Charlie calls on Rose for help and Rose calls on Harvey's mother to force him to leave. Evelyn described Harvey as, "At first charming, handsome, a raging bull in the sac, but the man has the emotional stability of a bag of rats in a burning meth lab." Harvey is last seen spying on Evelyn through Charlie's window just like his daughter, when she spies on Charlie. ﻿

Retrieved from "https://twohalfmen.fandom.com/wiki/Harvey?oldid=25463"
Community content is available under CC-BY-SA unless otherwise noted.