Start a Wiki
watch 01:24
The Loop (TV)
Do you like this video?
How to Get Rid of Alan Harper 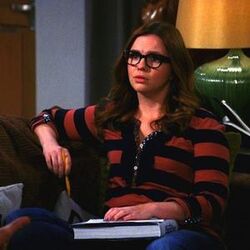 Larry invites Jeff/Alan to be his best man at his wedding to Lyndsey, but she visits Alan at the condo and tells him that 'Jeff Strongman' must die because she does not want Alan at her wedding. Jeff/Alan meets Larry's sister, Gretchen (Kimberly Williams-Paisley), and they find they have things in common and they start seeing each other. Walden thinks that Nicole is cheating on him when he sees her having dinner with another man. In fact, he is from Google, where they are working on a similar project to hers, and he offers Nicole a job. She wants Barry and Walden to go to San Francisco with her; Barry accepts, but Walden turns her down and they break up. Later, Barry turns up at the condo wanting to continue with their own project, and when Walden agrees, Barry walks into the house with his suitcase.

When Alan prefers the life of his alter-ego Jeff Strongman to his own, he wonders how to get rid of Alan Harper.

Retrieved from "https://twohalfmen.fandom.com/wiki/How_to_Get_Rid_of_Alan_Harper?oldid=24581"
Community content is available under CC-BY-SA unless otherwise noted.