Start a Wiki
watch 01:24
The Loop (TV)
Do you like this video?
I Changed My Mind About the Milk 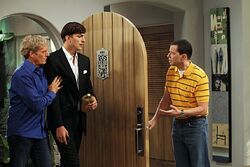 Walden plans a big surprise for Zoey's birthday, as he hires Michael Bolton to help him propose to Zoey, but she rejects the proposal and leaving him for someone else. After a night of binge drinking, Walden has some of Berta's pot brownies and picks up a woman. However, while having sex, Walden starts hallunicating about Zoey, His ex-wife Bridget, mother, Robinand, Michael Bolton which makes her drive away. Meanwhile In the sub-plot, continuing from Oh Look! Al-Qaeda!, Jake and Eldridge have joined the army. They adjust to life in the military, sporting shaved heads.

Walden, to Berta, while eating pot brownies, having just rejected her offer for milk.

Retrieved from "https://twohalfmen.fandom.com/wiki/I_Changed_My_Mind_About_the_Milk?oldid=24717"
Community content is available under CC-BY-SA unless otherwise noted.