Start a Wiki
watch 01:11
The Loop (TV)
Do you like this video?
Just Once With Aunt Sophie 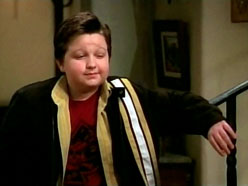 A girl from Jake's school named Wendy-Cho invites him to his first boy-girl party. Jake is nervous at first, but Alan and Charlie convince him to go. They also take him out to get a new change of clothes and a haircut. Jake finds Charlie's advice more helpful than Alan's, and Alan becomes upset that Charlie never helped him when he was younger - especially when Charlie receives a call from Jake saying that the party "is going well". Alan is worried that Jake will turn out to be like Charlie, until Jake later expresses his idea to marry Wendy-Cho, which leaves Charlie to explain that Jake is actually just like Alan.

Alan, about the first (and only) time he "copped a feel".

Retrieved from "https://twohalfmen.fandom.com/wiki/Just_Once_With_Aunt_Sophie?oldid=21167"
Community content is available under CC-BY-SA unless otherwise noted.