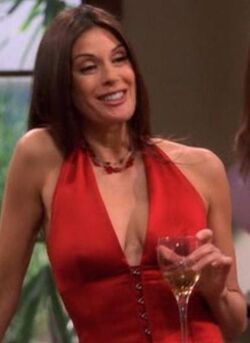 Liz is Judith's sister. She is a "sleaze-ball" and had sex with Charlie in the coatroom during Alan and Judith's wedding reception. Charlie is perplexed because Liz does not seem to remember him when it should be the other way around.

Liz comes to Jake's 11th birthday and starts to hit on Alan which upsets Judith greatly since it's Jake's birthday. In a midst of an argument, it comes out that Alan asked her out before he asked Judith out. Judith is hurt and in revenge, declares that she would "show Charlie a good time". Liz also declares that she would sleep with Alan. Both the "couples" go into their respective rooms. However, both sisters back out.

Retrieved from "https://twohalfmen.fandom.com/wiki/Liz?oldid=24694"
Community content is available under CC-BY-SA unless otherwise noted.