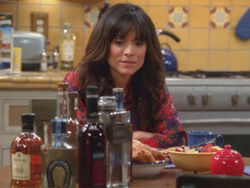 Michelle was a recurring girlfriend that Charlie had in Season 8. She was played by Liz Vassey.

Michelle was a dermatologist who met Charlie when removing a mole from his ass. The two went on a date in "Twanging Your Magic Clanger" and Charlie discovered she was actually four years older than him. She had a daughter Shauna who Charlie briefly desired (he even broke up with Michelle), but broke it off so not to hurt Michelle because of his lust. After lying the he wasn't over Chelsea, he was turned off by Shauna stating that she didn't date older men. He then resumed his relationship with her.

The two broke up in "The Crazy Bitch Gazette", after Michelle dumped Charlie on account of suspecting he had feelings for Rose.

In the Season 9 premiere, Michelle was present at Charlie's funeral.

Retrieved from "https://twohalfmen.fandom.com/wiki/Michelle?oldid=25416"
Community content is available under CC-BY-SA unless otherwise noted.