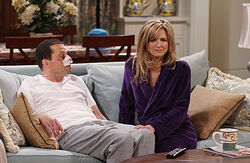 Walden's commitment to Zoey is tested when she and her daughter, Ava, move in with him. Once Walden runs out of energy playing with Ava and realized that she doesn't like any of the breakfast food he makes for her, he becomes annoyed.

Meanwhile, after realizing that he's going to move out of Walden's, Alan gets more than what he bargained for when he moves in with Lyndsey. Once he's there, Alan (sounds funny) electrocutes his right hand, making it numb, has his nose broken by Jake and Eldridge when they're looking for pot, and (possibly) gets rabies from a raccoon, and gets his scrotum cut by his zipper; all this just to have sex.

They both meet at the bar, where they confess things are not going well. Walden asks Alan to come back if he can get rid of Zoey and Ava, Alan happily accepts, and they hug it out.

Alan about having sex with Lyndsey after she asks about his broken nose.

Retrieved from "https://twohalfmen.fandom.com/wiki/Mr._Hose_Says_%22Yes%22?oldid=24707"
Community content is available under CC-BY-SA unless otherwise noted.