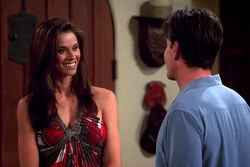 Nina is a minor character in the Season 5 episode, "The Leather Gear Is in the Guest Room". She first seen falling for Charlie, though he hoped to sleep with her but she leaves when he blurts out to Alan that she's "Just some one-night stand I picked up at a bar" and before leaving, she says the worst part was that she actually believed the things Charlie said to her.

Retrieved from "https://twohalfmen.fandom.com/wiki/Nina?oldid=22128"
Community content is available under CC-BY-SA unless otherwise noted.