Start a Wiki
watch 01:24
The Loop (TV)
Do you like this video?
One Nut Johnson 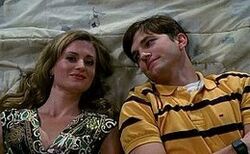 Walden is tired of dating or even meeting women who are only interested in his vast fortune; he decides to create an online persona as a poor schlub named "Sam Wilson" who is very much like Alan Harper (no job, no prospects, and no charm). When he goes shopping for discount clothing, he meets a wannabe fashion designer named Kate (Brooke D'Orsay) who is currently a salesperson at the store. She agrees to go to dinner with him, and they really hit it off. Kate later meets Alan, after "Sam" tells her that Alan owns the house he lives in. Alan immediately takes on a rich man's persona, and acts like a jerk to both Kate and "Sam". After two weeks of a budding relationship, Kate suggests that "Sam" get out from under Alan's influence and move in with her until he can get on his feet, so Walden heads off and leaves a gleeful Alan at the beach house. While cuddling together, Kate asks "Sam" that they have no secrets or lies between each other. So Walden tells her he is a billionaire, but she does not believe him and laughs off his "joke". Meanwhile, Alan ends up getting drunk and ordering people off his "private beach" while wandering around in an expensive bathrobe and no pants.

Jake, to Alan, about one of his army buddies who lost a testicle on the barbed wire course.

Retrieved from "https://twohalfmen.fandom.com/wiki/One_Nut_Johnson?oldid=22038"
Community content is available under CC-BY-SA unless otherwise noted.