Start a Wiki
watch 01:24
The Loop (TV)
Do you like this video?
Sleep Tight, Puddin' Pop 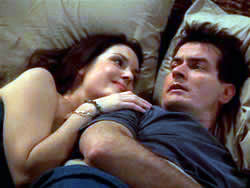 Charlie wakes up with Rose and gets the third degree from her easily angered father. Evelyn shows up and changes everything.

Charlie and Alan throw a small birthday party for Rose (after she forced them to), and after a night of drinking, Charlie wakes up to find Rose in his bed. Her irate father, Harvey, comes to ask Charlie about what the future holds for him and Rose, but the unexpected happens when Evelyn shows up, revealing that Evelyn to Harvey is much alike Charlie to Rose.

Harvey, spying on Evelyn as she's going to bed at Charlie's home.

Retrieved from "https://twohalfmen.fandom.com/wiki/Sleep_Tight,_Puddin%27_Pop?oldid=21107"
Community content is available under CC-BY-SA unless otherwise noted.