Start a Wiki
watch 01:24
The Loop (TV)
Do you like this video?
That's Not What They Call It In Amsterdam 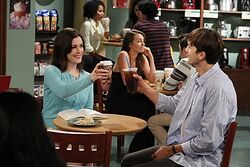 Charlie's successor in the Harper household, Walden dates Rose despite Alan's warnings against it because of what she did to his brother Charlie leading to his death. Alan and Lyndsey take Walden out to dinner, where they run into Zoey and her date, Peter. After dinner, Lyndsey, concerned for Walden, decides to set him up with one of her friends. After various double dates with bad results, Walden decides to stay single for a while. He goes out to Pavlov's where he meets Charlie's former stalker, Rose (Melanie Lynskey), and after saving her from choking to death on a peanut, the two hit it off. This news shocks Alan. He tries to warn Walden about Rose, describing her tactics and history, ((e.g. stalking Charlie until his death)) but Walden disregards them, as Rose explained everything to him. Alan remains suspicious of Rose, thinking she's out to get Walden and walks in on the two engaged in a bondage game, thinking Rose has manipulated Walden. At the end of the episode, Rose takes a video-call from Jake at the army base and implies she had been spying on him as well.

Rose, to Alan, about the leaf blower she is using for a bondage game with Walden - saying it's not called a leaf blower in Amsterdam.

Retrieved from "https://twohalfmen.fandom.com/wiki/That%27s_Not_What_They_Call_It_In_Amsterdam?oldid=24721"
Community content is available under CC-BY-SA unless otherwise noted.