Start a Wiki
watch 01:24
The Loop (TV)
Do you like this video?
That Voodoo That I Do Do 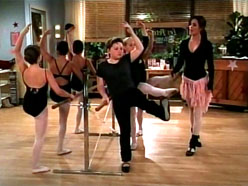 Charlie bribes Jake into taking ballet lessons so he can vie for the affections of the teacher. Things go awry, however, when Charlie and Jake find themselves competing for those affections.

Charlie sees an attractive ballet teacher named Mia (Emmanuelle Vaugier) at a coffee shop, but she isn't interested in him, causing him to go head over heels to win her. Desperate to woo her, Charlie bribes and tricks Jake into taking ballet lessons so he can get closer to her. The problem is that Jake gets a crush on her as well. In the end, Charlie manages to get closer to her, much to Jake's anger and dismay.

This is the first appearance of Mia.

Charlie, about making his move on Mia.

Retrieved from "https://twohalfmen.fandom.com/wiki/That_Voodoo_That_I_Do_Do?oldid=24773"
Community content is available under CC-BY-SA unless otherwise noted.