Start a Wiki
watch 01:24
The Loop (TV)
Do you like this video?
The Immortal Mr. Billy Joel 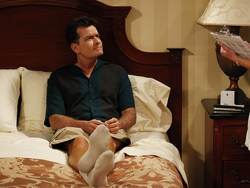 Alan goes out on the town pretending to be Charlie, while Charlie sneaks off for some cosmetic surgery.

Charlie is off to Las Vegas, allegedly to enjoy some time without Alan and Jake, but in fact for discrete cosmetic surgery. Alas, regular patient ma also checked in there.

Back home, Alan tries and borrows everything, even poses as rich Charlie in bars to score dates. However, even Alan lies at his act and Gretchen, the girl he picks up in a bar. He performs on the piano for her but she tells that she already knows the beach-house, being one of Charlie's countless exes. She asks him who he really is and he reveals he's Charlie's brother and offers to take her home but she likes the role play and it surprised Charlie. Before sex, Alan asks her why Charlie was freaked out until she appears in clad bondage in the form of a German nightmare. Though perturbed, Alan continues the encounter.

When Charlie comes home, he sees Alan's new mustache and remembers Gretchen. He shows mild sympathy at his brother's plight. Alan asks about his trip and Charlie boasts about it, until Alan reveals that he knows about the surgery.

Alan, naming the artist of the song that his about to play on the piano.

Retrieved from "https://twohalfmen.fandom.com/wiki/The_Immortal_Mr._Billy_Joel?oldid=25592"
Community content is available under CC-BY-SA unless otherwise noted.