Start a Wiki
watch 01:24
The Loop (TV)
Do you like this video?
The Ol' Mexican Spinach 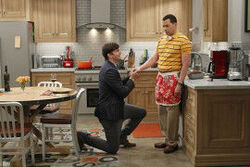 Following a health scare on Halloween, Walden decides to re-prioritize his life with Alan's help.

Walden (as Zombie Elvis) and Alan (as "Duckie" from Pretty In Pink, a role actually played by Cryer, whom everyone now thinks in Ferris Bueller) are preparing for a Halloween party when Walden suffers a mild heart attack. Alan and Berta (dressed as a Nun) both sit in the waiting room at the hospital and worry about their friend. Though the doctor says he should make a full recovery, Walden begins to rethink his whole life and decides he wants a child. He visits an adoption lawyer (Aisha Tyler) who tells him the system is rigged against single males adopting children. Having one failed marriage and two other women in his past who fled after he proposed, Walden is at an impasse...so he proposes to Alan.

Alan, referring to Walden's pot smoking habit as he talks to the EMT in the ambulance.

Retrieved from "https://twohalfmen.fandom.com/wiki/The_Ol%27_Mexican_Spinach?oldid=21721"
Community content is available under CC-BY-SA unless otherwise noted.