Start a Wiki
watch 01:24
The Loop (TV)
Do you like this video?
The Sea is a Harsh Mistress 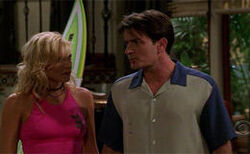 Charlie tries to surf to impress Dottie, a beautiful woman he just met, but after he nearly drowns he is convinced that he saw a vision of his late father, who tells him something Charlie finds worrying and crazy: he must take care of his mother.

Solely to get to a surfing girl, Charlie mounts his own board which had been gathering dust since he moved to Malibu, and nearly drowns at the first wave; he gets shark hallucinations and 'instinctively' tongue-kisses the burly lifeguard who resuscitates him mouth-to-mouth, but the worst thing is a vision of his dead father telling him to take care of his mother, Evelyn Harper. Alan first bitches dad didn't even mention him, but finally comes along to the dreaded dragon. She slips out to Alan his conception was a gas station condom accident, announces minor 'woman surgery' the next day and is invited to the beach house after what turns out to be plastic surgery, a fat transplant Jake calls 'her butt is in her lips'; in no time she angers both sons to despair again. Then while watching an old gangster movie on video with Evelyn, Charlie finds out that his father didn't men take care of her he meant get ride of her. His life-savior later shows up and asks him for a coffee, presumably eager for more French kissing.

Retrieved from "https://twohalfmen.fandom.com/wiki/The_Sea_is_a_Harsh_Mistress?oldid=21172"
Community content is available under CC-BY-SA unless otherwise noted.