Start a Wiki
watch 01:24
The Loop (TV)
Do you like this video?
The Straw In My Donut Hole 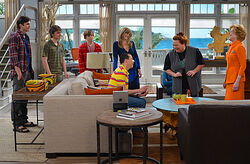 Everyone but Zoey is being incredibly and unusually nice to Alan when he gets home from the hospital after his heart attack: Walden lets him stay at the his beach house, Judith tells him not to worry about his lack of up-to-date child support checks until he gets back on his feet, and Lyndsey performs oral sex on him while he eats peach cobbler. Unfortunately, Alan's visit to his cardiologist, Dr. Goodman (Jason Alexander, Seinfeld) produces a clean bill of health and the prospect of everyone treating him normally again. Alan is left with one response: pretend that the news was bad and he might need a heart transplant. However, Zoey gets proof about Alan's misbehavior. Alan stupidly attempts to fake a heart attack, but fails and is left lying on the floor until his shame goes away.

Alan, to Zoey, telling her where to put his banana smoothie while getting a back massage.

Retrieved from "https://twohalfmen.fandom.com/wiki/The_Straw_In_My_Donut_Hole?oldid=24030"
Community content is available under CC-BY-SA unless otherwise noted.