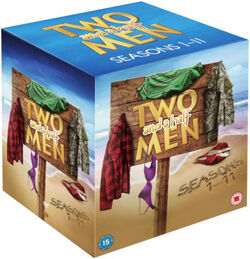 Two and a Half Men is an American television sitcom that airs on CBS, the series was created by Chuck Lorre and Lee Aronsohn, it stars Charlie Sheen, Jon Cryer, Ashton Kutcher, Angus T. Jones, Amber Tamblyn, and Edan Alexander, it first aired on September 22, 2003, and concluded on February 19, 2015 through a twelve season course. The show was revamped after Charlie Sheen was fired from the show. The ninth season premiered on September 19, 2011 with Sheen's character being killed off and being replaced with a new character being portrayed by Ashton Kutcher. As of the eleventh season, Angus T. Jones was cut from the series and was replaced by Amber Tamblyn, who portrays the lesbian daughter of Sheen's character. Other main credits have included Conchata Ferrell, Holland Taylor, Marin Hinkle, Melanie Lynskey, Jennifer Bini Taylor and April Bowlby.

Holland Taylor and Marin Hinkle have been credited as main characters in every season of the series, being the only ones excluding Jon Cryer. In the tenth season, Holland Taylor and Marin Hinkle were each credited as main, but both only made one brief appearance, Hinkle continued the 1 episode theme in the eleventh season, while Taylor made 4 fairly major appearances.

Conchata Ferrell was a major recurring character in the first season, and since season 2, she has been the most major character who isn't in the title, with the exception of season 7. In season 11, she appeared in every episode.

Melanie Lynskey was credited as a main character during the first 2 seasons. She was downgraded to a recurring status in season 3. She only made one appearance in each the seventh and eleventh seasons.

After his wife Judith divorces him, Alan Harper moves in with his jingle writer brother, Charlie Harper in his Malibu Beach House with Alan's growing son, Jake staying on weekends. Meanwhile, Charlie is in casual sexual relationships with numerous women until the sixth season as he becomes engaged to Chelsea but she breaks it off. Charlie then flies to Paris in the eighth season finale in the pursuit of Rose who is first introduced as a stalker.

It is revealed that Charlie has been killed in Paris offscreen, as he "slipped" in the front of a moving train as Alan suspects that it was Rose that pushed him since he cheated on her with a girl in the shower. Evelyn puts his beach house up for sale since it has three mortgages, and Alan has nowhere else to live. Alan is about to spread Charlie's ashes over on the beach, but an internet billionaire named Walden Schmidt startles Alan. Alan helps Walden as he tried to commit suicide in the ocean since he is going through a bad divorce with his wife, Bridget. Walden then decides to buy the beach house and Alan also becomes his roommate. Meanwhile, Jake is now a teenager, he then graduates high school and he decides to join the Army.

A woman shows up to the Beach House and claims she is Charlie's long-lost daughter, Jenny Harper as Charlie kept her as a secret and the last time she saw him was at her 4th birthday party. She soon moves in with Walden and Alan, they soon find out that she is a lesbian and is just like her father. Meanwhile, Walden is still looking for a relationship but hasn't find a good woman yet. Alan and Lindsey start having secret sex and when Lindsey's new boyfriend, Larry is not around.

Walden is faced with a health scare on halloween, and decides he will marry Alan to adopt a child, as it is easier to adopt as a couple.

Sheen, Cryer and Jones have made appearances in media other than the regular episodes.

Ethan Tremblay (played by Zach Galifianakis in the 2010 film Due Date) plays Jake's tutor Stu at the end of the film. Sheen, Cryer and Jones (deleted scene only) all make cameo in the scene.

Homer Simpson switches on the T.V. and watches a cartoonized version of Two and a Half Men, with Sheen, Cryer and Jones appearing in it.

Sheen, Cryer and Jones appear in an episode in a cartoonized version, with Sheen providing voice as himself.

Before Two and a Half Men, Charlie Sheen, Jon Cryer and Ryan Stiles worked on the film Hot Shots in 1991

Retrieved from "https://twohalfmen.fandom.com/wiki/Two_and_a_Half_Men?oldid=25087"
Community content is available under CC-BY-SA unless otherwise noted.