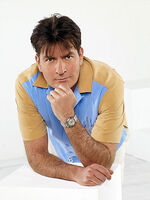 Charlie
Charles Francis "Charlie" Harper, portrayed by Charlie Sheen, was the main character in Two and a Half Men of the first eight seasons of the show. He was Evelyn's first child and the elder brother of Alan Harper, which made him Jake's uncle.

Get Season 11 on Amazon today!

Go to these sites for info or for help with your own wiki!

The Alvin Show • The Amazing Race • The Andy Griffith Show • The Big Bang Theory • Big Brother • Blue Bloods • The Bold and the Beautiful • Criminal Minds • CSI: Crime Scene Investigation • Elementary • FBI • Garfield and Friends • The Good Wife • Happy Together • Hawaii Five-O • How I Met Your Mother • Instinct • M*A*S*H • MacGyver • Madam Secretary • The Mentalist • The Muppet Show • Murphy Brown • NCIS • Person of Interest • Sabrina the Teenage Witch • SEAL Team • Survivor • Tell Me a Story • Two and a Half Men • The Young and the Restless

Want your community included? See how!

Retrieved from "https://twohalfmen.fandom.com/wiki/Two_and_a_Half_Men_Wiki?oldid=24558"
Community content is available under CC-BY-SA unless otherwise noted.