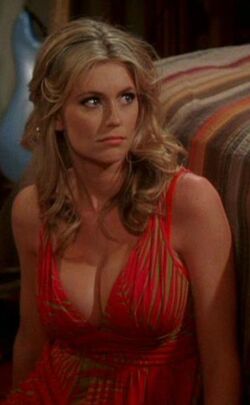 Wanda is a character from Two and a Half Men. She is one of Charlie's ex-girlfriends and appears only in one episode of Season 6.

Charlie initially agrees but later becomes reluctant as he would be cheating on Chelsea. A half-naked Wanda falls unconscious due to intoxication after Chelsea tells Charlie she would be returning to his house soon. He convinces Alan and later Jake to dump her somewhere away from his house, but she wakes up before they can carry it out.

She walks into Charlie's bedroom to find her shoes and then leaves the house, though she doesn't care or doesn't know that Charlie was having sex with Chelsea in his bedroom.

Add a photo to this gallery
Retrieved from "https://twohalfmen.fandom.com/wiki/Wanda?oldid=25295"
Community content is available under CC-BY-SA unless otherwise noted.