Start a Wiki
watch 01:24
The Loop (TV)
Do you like this video?
Welcome Home, Jake 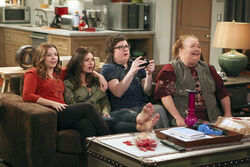 Lyndsey discovers that Alan is sleeping with Larry’s sister, Gretchen. Meanwhile, Walden struggles with telling Barry to find his own place.

Alan starts to date Gretchen, Larry's sister albeit as Jeff Strongman and is caught by Lyndsey and Larry having kinky sex in their living room. At dinner, Gretchen and Alan are all over each other with Larry hoping that the two couple will be together forever. Finally Lyndsey comes up to Alan and starts making out with him. Barry is staying with Walden transitioning after Nicole leaves and is looking for new projects to do with Walden. Instead he hangs out with the other girls and getting stoned. Walden finds him another place to stay finds and actually tells him to move out. After this personal revelation, he goes home to tell Alan to move out and finds Barry already back there visiting. Walden then moves in the apartment he rented for Barry since four people were now living in his condo.

Retrieved from "https://twohalfmen.fandom.com/wiki/Welcome_Home,_Jake?oldid=24802"
Community content is available under CC-BY-SA unless otherwise noted.