Start a Wiki
watch 01:24
The Loop (TV)
Do you like this video?
Welcome to Alancrest 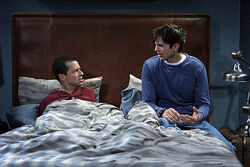 Kate falls into depression after failing to achieve her dream of becoming a fashion designer, so Walden tries to help out. He gives Alan $100,000 to invest in Kate's fashion line, which Alan takes a disliking to, but invests anyway. Meanwhile, Walden's stress of being himself and "Sam Wilson" begins to get to him, causing him to lose his hair, and making him unable to sleep or get an erection. Alan tries to help him with his erection problem by taking him to Charlie's pharmacist, Russell (Martin Mull), who offers weird solutions. After Kate leaves for a fashion show in New York City, Walden decides he will abandon his "Sam" persona and reveal to her who he really is. Stressed about how he is going to do it, Walden spends the next three weeks at Kate's apartment gorging himself with junk food, and becoming fat.

Alan, welcoming Kate and Walden into the house.

Retrieved from "https://twohalfmen.fandom.com/wiki/Welcome_to_Alancrest?oldid=25771"
Community content is available under CC-BY-SA unless otherwise noted.