Start a Wiki
watch 01:24
The Loop (TV)
Do you like this video?
Young People Have Phlegm Too 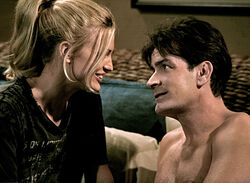 Charlie tries to convince himself and Alan that he's not too old to be part of the wild, young party crowd.

Charlie is getting older, making love every day or more exhausts him physically, to the point of needing a rest between bangs. So he needs to take his girl Robin -24, about half his age- out again, and brings Alan dancing to a club for her 24-year, ugly girlfriend, a recipe for a miserable night followed by a brotherly row. Then Charlie gets chest-pains, Alan brings him to hospital, clearly worried even more when he hears the beach-house inheritance comes with a mortgage. After Dr. Prajneep finds it's only gas, Alan takes Charlie to a 'fountain of youth' for their age.

Charlie, to Alan, after he coughs up phlegm.

Retrieved from "https://twohalfmen.fandom.com/wiki/Young_People_Have_Phlegm_Too?oldid=24190"
Community content is available under CC-BY-SA unless otherwise noted.