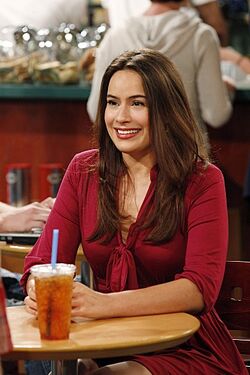 Zoey grew up in England with British heritage. Zoey goes to school to become a lawyer, and eventually meets Nigel Pierce and they are married. Zoey and Nigel have one child together, a daughter which they name Ava Pierce. For unknown reasons, Zoey and Nigel get divorced and Zoey obtains main custody of Ava.

Zoey first meets Walden at the super market, resulting in Walden asking her out. Zoey says yes, but their date doesn't go well when Walden tells Zoey of his suicide attempt and talks non stop about his ex-wife, Bridget. Zoey tells Walden that he isn't over Bridget and she can't be with him because of this.

In the next episode, Walden invites Zoey for coffee and he assures her that he is over Bridget by signing his final divorce papers in front of her and they become a couple. They consummate their relationship soon afterwards on Walden's private jet on their way to Mexico after Walden reveals that he got her daughter, Ava, into the private school she was trying to get her into.

In the season 10 premier, Walden tells Alan of his plans to propose to Zoey and asked him to be his best man at the wedding. Later, Walden and Zoey are at the restaurant and Walden get's down on one knee and says; "Will you do me the honor of becoming Zoey Hyde-Tottingham-Pierce-Schmidt?''' and she tearfully replies; "No! I'm sorry! I can't do it!" and she runs out of the restaurant crying. Walden slowly stands up and the singer behind him continues to sing "When A Man Loves A Woman" and Walden snaps at him to stop and the romantic fireworks that Walden set up then go off in the background and Walden is left standing there, heartbroken.

Walden later finds out she's with someone else, writes her off as "liking dick" and gives her daughter a destructive dog for her birthday out of spite.

Retrieved from "https://twohalfmen.fandom.com/wiki/Zoey_Hyde-Tottingham-Pierce?oldid=25732"
Community content is available under CC-BY-SA unless otherwise noted.